Home » Altitude » Park City Altitude: How to Deal with the High Elevation

Park City Altitude: How to Deal with the High Elevation 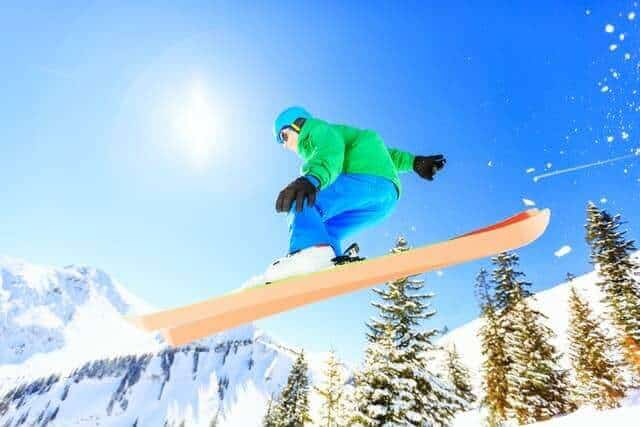 Park City is a high-altitude winter and summer sports destination in Utah. The elevation ranges from 7,000 feet downtown to 10,000 feet at the top of Jupiter Peak.

It’s home to the Park City Mountain Resort, which is the largest ski resort in the United States. They have 17 slopes, 14 bowls, 348 trails, 8 terrain parks, and 22 miles of lifts spread across 7300 acres. There’s something for everyone.

It is also popular in the summer with excellent mountain bike trails and other outdoor activities. They also host the Sundance Film Festival each year in January.

The altitude of Park City can be difficult for some to adjust to. The following guide will help you identify signs of altitude sickness and understand how to deal with the elevation.

Did you know that an elevation that is 6,000 feet above sea level is considered ‘high altitude? Interestingly, 172 cities and towns in the United States are at least 6,000 feet tall.

At 7,000 feet, Park City is the 92nd highest town in the USA and the 11th tallest town in Utah. That’s not the whole story, though!

If you ski down the slopes of Jupiter Peak, you’ll reach an altitude of 10,000 feet above sea level. Plus, there’s a lovely downcanyon view.

It’s essential to understand the effects of altitude before you go skiing. That’s because the ski slopes are at a higher elevation than downtown.

Can You Get Altitude Sickness in Park City?

Yes, you can get altitude sickness in Park City. If you’re not heading up the slopes, you’re unlikely to experience symptoms beyond those of mild altitude sickness. It’s a different matter for the ski slopes, though, which are at a higher elevation.

Each year, tourists seek medical care for severe complications due to altitude illness after skiing or snowboarding at the Park City resort.

Approximately 50% of people experience headaches with extended stays at heights over 9,000 feet. Those spending too much time on Jupiter Peak might develop a headache as the elevation is 10,000 feet.

How Do You Prevent Altitude Sickness?

The best way to prevent altitude sickness is to ascend slowly to a higher elevation. Adjusting to Park City’s height takes time.

If you’re coming from a lower elevation, you should allow yourself extra time to adjust to the new height. Are you landing at Salt Lake City international airport? The air you’ll be breathing there already has 17% less oxygen than what you would find back home at sea level. It’s even thinner in Park City, which is only a 35-minute drive away from Salt Lake City international airport.

Besides giving your body time to adjust to the new altitude, you should:

Acetazolamide, also called Diamox, is a shortcut to acclimatizing to new elevations. It is a carbonic anhydrase inhibitor that makes your blood more acidic. In turn, this will stimulate your breathing, allowing you to absorb more oxygen. It’s an effective preventative and treatment medication, so if you are worried about altitude sickness, ask your doctor for a prescription.

Is there medication to prevent altitude sickness?

Diamox is a medication that can prevent altitude sickness, but most visitors will not need it.

Visitors who are already prone to altitude illness and those who don’t plan on acclimating should consider taking altitude sickness medication.

A course of Acetazolamide should begin 1 to 2 days before you arrive in Park City. After you arrive, continue taking it for at least 48 hours.

You might need to continue using this medication for the duration of your visit to reduce the symptoms of altitude sickness. It’s important to understand that even when taking Acetazolamide, it’s still possible to develop altitude sickness.

No, physical fitness does not offer protection from altitude sickness. The myth that a high fitness level will make you immune to altitude illness can worsen your symptoms. Why? It’s because you’ll be more likely to head up the slopes quickly and overdo it.

Everyone can experience altitude mountain sickness, no matter their fitness level.

People with heart failure, angina, sickle cell disease, pulmonary insufficiency, or hypoxemia should speak to their physician before traveling to high-altitude areas.

As elevation increases, the quantity of oxygen you inhale in every breath decreases. This stress on your body is counter-indicated if you have certain pre-existing conditions.

Each inhaled breath on Jupiter Peak contains 69% of the oxygen found in a breath taken from sea level. The thin air can lead to oxygen deprivation in individuals with pre-existing conditions.

How to Spot Altitude Sickness Symptoms

Altitude sickness is typically mild in Park City, but it’s still important to recognize the signs in your body. That way, you will know when it’s something more serious.

Twenty-five percent of tourists sleeping above 8,000 feet, such as the mid-mountain area of Deer Vally Resort, will experience some form of AMS. If you feel like you have the flu or a hangover, chances are your new elevation is to blame.

High-altitude pulmonary edema is a condition that generally begins as a form of altitude mountain sickness. HAPE typically, but not always, occurs 2 to 5 days after moving to a high elevation. Don’t ignore the signs of HAPE. In the advanced stages of the disease, it has a 50% mortality rate.

Symptoms of High-Altitude Pulmonary Edema include a dry cough, crackling in your chest, wheezing, and shortness of breath. If you are experiencing these symptoms, seek medical attention immediately.

As HAPE progresses, your cough will worsen you may have trouble breathing at all, even when sitting or laying down. If you still haven’t sought medical care at this point, you need to do so immediately. Your life depends on it.

As the condition worsens, you may experience gurgling sounds in the chest and frothy pink fluid coming out of the mouth. The symptoms are a sign of High Altitude Pulmonary Edema.

You may notice that you’re having trouble breathing, that your lips are blue, and that you have a rapid heart rate. These are all signs of a very severe case of HAPE.

High-altitude cerebral edema (HACE) is the least common form of altitude sickness but is extremely serious. If you don’t seek medical treatment, you can fall into a coma within 24 hours, often followed by death.

Those suffering from HACE have life-threatening brain swelling. A person may act as if they are drunk at a high altitude when they have high-altitude cerebral edema. Symptoms include slurred speech, coordination difficulties, stumbling, falling, confusion, severe headache, and/or violent behavior.

If you are experiencing HACE symptoms, head to a lower altitude immediately and seek medical care.

Treatments for altitude sickness will depend on the severity of symptoms. The number one rule for those who are feeling unwell due to elevation? Don’t go higher.

Mild Cases: Treatment includes rest and hydration while avoiding smoking, drinking, or challenging activities. If you have a headache, feel free to take over-the-counter pain medication for relief. If your symptoms persist, you move to a lower altitude to prevent your condition from worsening.

Moderate Cases: Consult a doctor while moving to a lower elevation. Once you are at a lower altitude, you should begin to feel better.

Your doctor may prescribe Diamox, also called Acetazolamide, to treat and prevent altitude illness. This medication will accelerate the acclimatization process, which is how you get used to the new height. Dexamethasone and supplemental oxygen are also sometimes used.

If you have more questions about altitude or Park City, we have the answers! Here is a collection of the questions that visitors to Park City ask most often.

You probably know that Park City has an elevation of 7,000 feet, making it the 11th highest town in Utah.

What is the highest peak in Park City, Utah?

The highest peak in Park City is Jupiter Peak, with an elevation of 10,000 feet.

How many peaks does the Park City Mountain Resort have?

At what elevation is it hard to breathe?

Visitors who find it hard to breathe generally encounter difficulty at elevations greater than 8,000 feet. No individual is the same, though, and some people find it difficult to breathe at lower elevations.

What are the three stages of acclimatization to high altitude?

The three stages of acclimatization to high altitude are:

Acclimatization is how we get used to dealing with higher elevations.

Will you get drunk faster in Park City?

No, the elevation in Park City won’t make you get drunk faster. Your blood-alcohol content will be the same after two drinks in Park City as it would be in Los Angeles.

So why do people think alcohol makes them feel drunk faster when they’re at higher altitudes? It’s because of altitude illness!

Do you age faster at higher altitudes?

Yes, at least in terms of physics. According to Einstein, clocks at higher heights run faster because there is less gravity.

You don’t have to worry about aging at higher elevations caused by the laws of physics, though. If you live your whole life in Park City, you’ll only be 0.0007 seconds older than someone living at sea level.

Apart from physics, altitude can have different aging effects on different people. Studies have shown that groups living at high altitudes have 20% of the obesity rates of those at sea level. That’s positive for both aging and the heart.

On the other hand, the rate of respiratory diseases in populations that live at high altitudes is greater than those at sea level. If you have respiratory issues, living at altitude is likely to make you age faster.

While there’s little evidence showing that dark chocolate helps with altitude illness, some people do recommend it. Enjoy some dark chocolate while descending to a lower altitude.

Does salt help with altitude sickness?

What is the altitude of Deer Valley, Utah?

The base altitude of Deer Valley Resort is 6,570 feet. Guests that stay near the middle of the mountain will be at the height of 8,100 feet. If you head out to ski, the top of Empire Peak is 9,570 feet.

How far is Park City from Deer Valley?

Park City is 1.6 miles by car to Deer Valley.

What is the highest ski resort in Utah?

Snowbird Ski Resort is the highest ski resort in Utah, with an elevation of 11,000 feet at the summit.

The ski resort with the highest base elevation in Utah is Brian Head Ski Resort. The height at the base is 9,600 feet, with the summit reaching10,970 feet.

What is the altitude effect on golf ball distance?

If you’re golfing at Park City’s Canyons Golf Course, the altitude can improve your game. That’s because at higher altitudes, there is less air resistance for a golf ball to overcome. As a result, golfers can achieve 6 to 7 percent more distance at Park City’s elevation!