Home » Alcohol » How Much Sugar is in Bacardi Rum: A Quick And Easy Nutrition Report

How Much Sugar is in Bacardi Rum: A Quick And Easy Nutrition Report 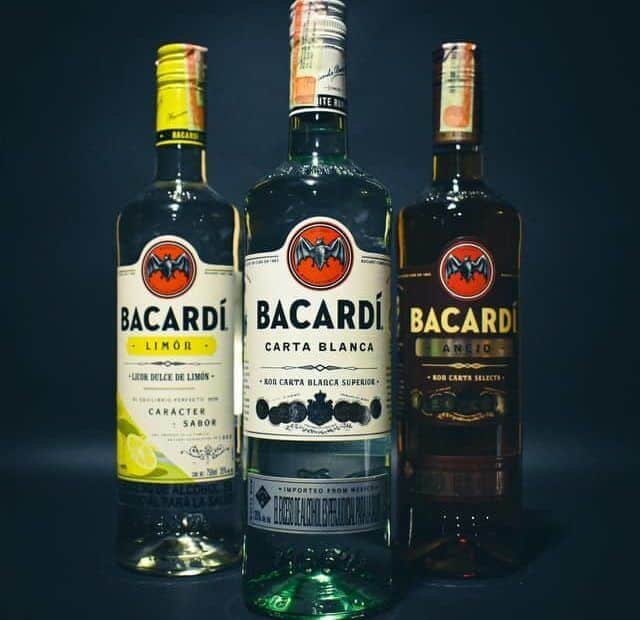 Regular Bacardi Rum contains absolutely no sugar or carbs at all!

This article discusses the sugar content of Bacardi Rum. Bacardi is bottled at 80 proof (40% ABV) in the USA and 75 proof (37.5% ABV) in the UK and Continental Europe. The rum is made from a mixture of sugar, water, yeast, molasses (a byproduct), caramel colorings (syrup). Other flavorings such as vanilla extract and fruit juices like pineapple juice can be used to sweeten it up. During the fermentation process, the sugar is completely converted into alcohol. The final product, Bacardi Rum, has 0 grams of sugar.

What is Bacardi Rum?

Bacardi Rum is a distilled alcoholic beverage with a light golden-brown color. It is a type of rum produced in Puerto Rico and is the leading international brand of rum. The production of Bacardi rum is overseen by the company’s head office in the Bahamas, and it is distilled from sugarcane juice. The American head office is in Coral Gables, Flordia.

Bacardi rum is made from fermented sugar cane that has been distilled, which means it’s then sweetened with added back in the distillation process. The company produces three main grades of Rum: Aged 12 Years, Extra Dry, and Gold Reserve.

The Bacardi Rums are light-bodied, low-calorie drinks with different flavors like pineapple or coconut water.

Bacardi rum is made with a mixture of water and sugar cane. During the fermentation process, the sugar from the sugar cane is wholly converted into ethyl alcohol. The final product contains no sugar. It’s not sweet because it is fermented in oak barrels for six months to create its unique flavor.

According to Bacardi’s website, the amount of sugar in most Bacardi rums is 0 grams per 1.5 ounces (44.36 mL).

What Mixers Go With Bacardi?

Bacardi Rum is a famous rum that goes well with many mixers. Pineapple juice, coconut water, hot chocolate are some of the most popular Bacardi mixers. Club soda is one of the most common choices for mixing Bacardi as it has a light flavor and neutral taste profile. Fruit punch and ice cream are also commonly mixed with this rum to give it an extra kick!

Lemon/lime or club soda are other popular combinations that work well together.

Grapefruit Rum is a mixed drink that combines grapefruit juice with light rum. The drink is bright and sweet and can be served as an after-dinner cocktail or dessert drink.

Bacardi Rum is a distilled alcoholic beverage created by the Bacardi family in 1862. It consists of 40% alcohol by volume and has a slightly sweet taste. The nutrition facts of Bacardi Rum per 1.5 ounces serving size are as follows:

What are the vitamins and minerals in Bacardi Rum?

Bacardi rum contains insignificant amounts of vitamins, minerals, or fibers. Iron, Phosphorous, Potassium, and Zinc are present only in trace quantities. To ensure you receive the proper daily value of vitamins and minerals, take a multi-vitamin and eat a well-balanced diet. For further nutrition advice, speak to a health care professional.

Calorie and nutrition values for 100ml of Bacardi and Diet Coke

The Bacardi Rum brand has nutrition information available through its website. A single serving of 1.5 ounces of Bacardi rum mixed with diet coke contains 98 calories, 0 g of sugar, 0 g of sodium, 0 g of fat, 0 g of trans fat, and 0 g of carbs. Rum is a good choice for those wanting to drink but who are watching their net carbs or on a restricted-calorie diet.

Is Rum Healthy To Drink?

Rum is generally considered healthy to drink if consumed in moderation. It also contains antioxidants and other nutrients in trace quantities. However, some people may have allergic reactions to additives.

Abusing rum, just like any other alcoholic beverage, can lead to an increased risk for hypertension, heart disease, diabetes, and liver problems over time. Drink in moderation to avoid these issues.

A diabetic patient can drink rum as long as their blood sugar levels are under control. Rum is a distilled beverage that has been fermented from sugar cane juice and molasses, which means it does not have a high glycemic index. Other spirits with low or no carbs are whiskey, vodka, and gin. This doesn’t mean that alcohol consumption is suitable for a diabetic patient. As always, drink in moderation and seek medical advice for particular concerns.

Which alcohol is least harmful to your liver?

The alcohol that is least harmful to your liver is low alcohol or alcohol-free beer. Beer typically has a lower alcohol content than other alcoholic beverages, so it’s the least likely to cause long-term damage to your liver if used infrequently and in moderation.

The primary consequence of overconsuming alcohol is Alcohol Use Disorder (AUD), classified as mild, moderate, or severe. It’s essential to be aware of how much you’re consuming. That’s because drinking more than two alcohol units daily can lead to health problems like liver damage, heart disease, type 2 diabetes mellitus (T2DM), inflammation in joints due to arthritis, and more. For your health, ensure that your alcohol consumption is moderate and infrequent.

Rum is made from a fermented sugarcane byproduct known as molasses. Rum, in general, has no sugar because the sugar present in the fermentation stage is converted into ethyl alcohol. Certain types of rum, such as dark rums and flavored rums, do have sugar present in low quantities.

Bacardi Rum is a light rum that has been produced for centuries, but the sugar content varies from dark to light rums.

In countries with Spanish influence, such as Cuba and Puerto Rico, this type of alcohol would be more suitable because it provides an easy-to-consume flavor profile. However, in other countries where there are more traditional staples on the market, like Japan or China, consumers might find Bacardi’s lighter taste too sweet, which could cause people to avoid drinking at all.

Which rums have added sugar?

Bacardi Rum is a distilled alcohol that comes from fermented sugar cane derivatives. However, the sugar doesn’t pass through the distillation process, and some producers add sugar back into the distilled rum to sweeten it up before bottling. In the Bacardi rums with added sugar, the average amount is 17-22 grams per liter. Additional nutritional information can be found on their website.

Can rum be made without sugar?

No, rum cannot be made without sugar because the alcohol in rum comes from the sugar present in sugar cane. Most rums have no to low sugar as the sugar is converted into alcohol during the fermentation process.

How Much Sugar Is In Bacardi White Rum?

Bacardi White Rum is a light-bodied variant with a soft, sweet taste. It is made by fermenting sugar cane into alcohol and is mainly used to make cocktails. There are 0 grams of sugar in Bacardi white rum.

The Bacardi White Rum has 98 Calories per 1.5fl oz serving.

Bacardi White rum does not contain any carbs.

How Much Alcohol Is In Bacardi White Rum?

Bacardi White Rum is made from molasses, sugarcane juice, water, and lime. In most countries, it contains 40% alcohol by volume (ABV) while it has 37.5% ABV in a few countries. It’s best known as a rum used for making cocktails with other ingredients like fruits or herbs.

Bacardi White Rum Mixers is the perfect way to enjoy Bacardi. The blend of rum, pineapple juice, and coconut water gives it a refreshing taste that will keep you coming back for more! The drink can be enjoyed straight or mixed with your favorite mixers.

Cuba Libres is a drink that typically mixes Bacardi White Rum with cola and lime juice. However, there are many variations on this drink, including orange juice, pineapple juice, coconut cream, and grenadine.

Bacardi Gold Rum is a rum made from sugar cane for one to two years in charred oak barrels. It has been described as “light, fruity and smooth” and is perfect as an after-dinner drink or in a cocktail such as a Piña Colada. The rum has only 98 calories per 1.5 ounces serving size and no carbs, making it an excellent choice for those looking to watch calorie intake while still enjoying a drink.

How Much Sugar Is In Bacardi Mango Rum?

How Much Sugar Is In Bacardi Rum Punch?

How Much Sugar Is In Bacardi Spiced Rum?

Does Coconut Rum Have Sugar?

Yes, coconut rum has sugar because sugar is added back to it after the fermentation process is complete.

How much sugar is in Bacardi Coconut Rum?

Bacardi Coconut Rum is a white rum and is a coconut-flavored, rum-based liqueur. It has an alcohol content of 70 proof (35% ABV). Many rum cocktails are made with this particular type of white rum, so it’s not uncommon to find them as part of a drink recipe.

This product is used for mixing drinks that call for “white” rums, such as Cuba Libre, Daiquiri, Piña Colada, and Mojito.

Appleton Rum Sugar is a mix of cane sugar, dark rum, and aged rum. The ingredients are heated together until the ingredients dissolve. It is then left to cool overnight in a copper pot. Appleton Rum contains 0 grams of sugar.

Which Alcohol Is Lowest In Sugar?

The sugar content in alcohol is measured in grams. The least amount of sugar in an alcoholic beverage is found in rum, vodka, whiskey, tequila, and gin which generally has no to very low sugar per 100 ml. In contrast, pre-mixed sugary cocktails have the most amount of sugar.

Which Alcohol Is Highest In Sugar?

Sweet wines and pre-mixed sugary cocktails are the alcohols with the highest amount of sugar content.

What Alcohol Has The Least Amount of Sugar and Carbs?

Spirits such as rum, vodka, tequila, gin, and whiskey have no to low sugar and carbs.