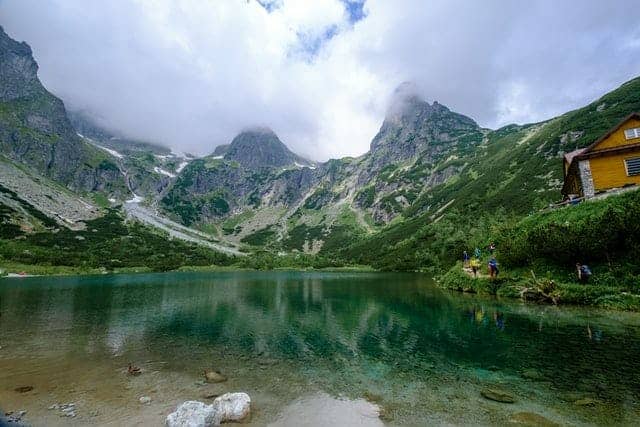 If you’re planning a trip to Slovakia, you’re probably looking into hotels, flights, things to do, how local taxis work, where to get a rental car, and what the weather is supposed to be like. Before leaving on your trip, you’ll also want to understand Slovakian customs. One important custom to understand is tipping in Slovakia. Will you be expected to tip in Slovakia or is there not? Do you tip some people but not others? Is the tipping etiquette different in the capital of Bratislava, compared to the rest of the country?

Introduction to Tipping Etiquette in Slovakia

Tipping in Slovakia During the Soviet Era

During the Soviet era in Slovakia, it was common to tip by rounding up to the next 10 koruny. That’s changed a bit and also the currency of Slovakia is now the euro. Read on to find out the modern-day tipping etiquette in Slovakia.

Tipping at Restaurants in Slovakia

If you’re visiting Slovakia, you’ll probably eat at a restaurant at least once, so you should understand restaurant tipping etiquette in Slovakia.

Do you tip at restaurants in Slovakia?

While you don’t have to tip at restaurants in Slovakia, it is common for locals to round up the bill to leave a small tip.

While tipping isn’t as established outside of the main cities, it is common in urban areas such as Bratislava, the capital of Slovakia. In Bratislava, people tip more and often base it on a percentage of the bill.

Keep in mind that if your restaurant charges a service fee, you don’t need to leave any tips.

How much should you tip at restaurants in Slovakia?

If your restaurant charges a service fee, feel free not to leave tip or to just round up to the nearest euro.

Tipping at Hotels in Slovakia

On your trip to Slovakia, you’ll be staying in a hotel, unless you’re staying at a vacation rental or with friends and family. If a stay at a Slovakian hotel is in your travel plans, you’ll want to know whether you should tip the hotel staff or not. Should you tip your bellhop for helping to carry your luggage? Do you need to tip your housekeeper for cleaning your room? How about the hotel’s concierge who books events, tours, and restaurants for you?

Do you tip at hotels in Slovakia?

In Slovakia, you’ll need to tip your hotel’s luggage porter/bellhop if they help you with your bags. Tipping the other hotel staff such as your housekeeper and the concierge is completely optional and at your own discretion.

How much should you tip at hotels in Slovakia?

If the luggage porter/bellhop helps you with your luggage, you should tip them 1 euro per bag.

While you don’t need to tip your housekeeper or concierge, tips are appreciated. The housekeeper can be left a 2 euro cash tip in the room each day (with a note saying it’s for them!). Don’t wait to leave a tip for your housekeeper at the end of your stay as the person who cleans your room often varies by day. If the concierge helped you book an event, score a reservation to a hard-to-book restaurant, or arranged a tour for you, feel free to tip them 1 to 2 euros.

Visitors to Slovakia often book a tour during their stay or come to Slovakia as part of a tour group. If you’ve had an enjoyable tour and a knowledgeable tour guide, do you need to tip the tour guide at the end of the tour?

Do you tip tour guides in Slovakia?

No, you don’t have to tip your tour guide in Slovakia, but tips are appreciated.

How much should you tip your tour guide in Slovakia?

A taxi can be a convenient way to get around town while taking out the stress of driving in a foreign country. If you do it correctly, it can also be relatively inexpensive. But do you need to leave your taxi driver a tip?

If you’re hailing a taxi on the street in Slovakia make sure you agree on a price to wherever you’re going before you get into the taxi. Otherwise, you might end up paying a lot more than you expected. The easiest way to avoid these kinds of issues is to use a taxi app such as Uber, HOPIN, or BOLT (Taxify) which all operate in Slovakia, some in different areas.

Do you tip taxi drivers in Slovakia?

No, you don’t need to tip your taxi driver in Slovakia. Tipping taxi drivers isn’t part of the local tipping culture so do like a local does and don’t leave a tip.

How much should you tip taxi drivers in Slovakia?

Although you don’t have to tip your taxi driver, you can leave a tip if you want to. It’s common to round the fare up to the nearest euro to leave a small tip. This also avoids having to wait for the taxi driver to make change for you.

If you’re in Slovakia and don’t want to risk getting scammed by a taxi driver for being a foreigner, using a taxi app on your phone is a good option. If you’re from a country that has Uber, you will want to know whether there’s Uber in Slovakia and, if so, how much you should tip the Uber driver.

First thing first: Is there Uber in Slovakia?

Do I need to tip my Uber driver in Slovakia?

No, you don’t have to leave a tip for your Uber driver in Slovakia. There’s no taxi tipping culture in Slovakia and this extends to Uber so feel free not to tip while using Uber in Slovakia.

Tipping Hairdressers and Barbers in Slovakia

If you’re in Slovakia and in need of a haircut, you’ll want to know if you should tip your hairdresser or barber for a good cut.

Do you tip hairdressers or barbers in Slovakia?

No, you don’t have to tip your hairdresser in Slovakia. Tipping hairdressers is not part of the Slovakian tipping culture so feel free not to leave a tip. Tips are, of course, always appreciated.

How much should you tip hairdressers or barbers in Slovakia

Tipping at Spas and Massage Therapists in Slovakia

Are you planning on going to a Slovakian spa or have an appointment with a massage therapist? Before you go, you’ll want to know if you should leave a tip as you would at home or if a tip is not expected.

Do you tip at spas and massage therapists in Slovakia?

How much should you tip at spas and massage therapists in Slovakia?

First, remember that you don’t have to leave a tip at spas or massage therapists in Slovakia. If you’d still like to leave a tip, then 5% – 10% would be considered a good tip.