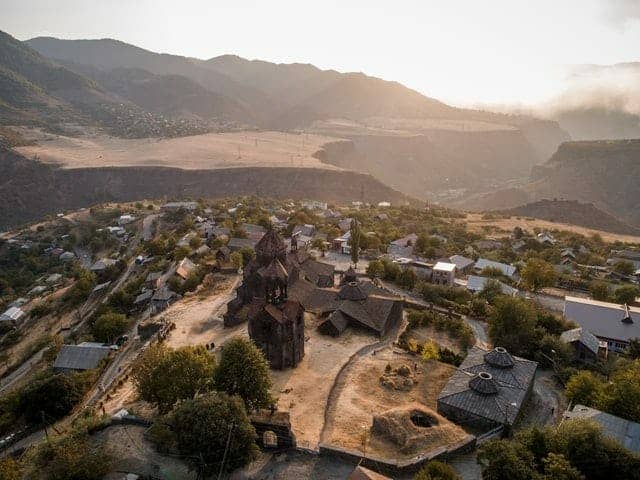 If you’re planning on traveling to Armenia, you’ll be looking at flights to Armenia, hotels or vacation rentals, a rental car or how taxis work, and tours or things to do by yourself. Before you go, you’ll also want to understand local Armenian customs to be a good guest and avoid giving offense. One of the most important local customs to get a grip on before visiting Armenia is the culture of tipping in Armenia. Are tips expected in Armenia or is there not a strong tipping culture? Is the tipping etiquette different in Yerevan, which is the capital of Armenia, than in the rest of the country?

Tipping is customary and expected in some situations that you’ll find yourself in, but not in others. Tipping doesn’t work the same as it does at home, so continue reading this tipping guide to learn more about tipping in Armenia.

In earlier post-Soviet years, tourists going to Armenia mostly came from the Armenia diaspora and were visiting relatives, exploring their Armenia roots, and seeking to understand Armenian history. While the Armenian diaspora remains important to the Armenian tourist sector, many other people from around the world are choosing Armenia as a vacation destination. Armenia is becoming an increasingly popular international tourist destination, with more than 1.6 million tourists visiting annually.

Armenia is one of Europe’s best-kept secrets. If you’re interested in Armenian history or perhaps exploring your own Armenian roots, there’s plenty to do. Must-see attractions are the Armenian Genocide Museum, enchanting monasteries, Armenian art, and archaeological sites. Armenia has 4 UNESCO World Heritage sites, one of which is the Geghard Monastery, part of which is carved out of a mountain. Armenia has many outdoor activities and winter sports enthusiasts will enjoy the local ski resorts.

One of the most popular outdoor activities is to climb the distinctive Armenian natural landmark of Mount Ararat, which is at 5137 meters/16854 feet. People plan a trip to Armenia just to climb Mount Ararat from the Armenian side. Mount Ararat is considered to be Armenia’s national symbol and an important brand. It’s on the border between Armenia and Turkey. Interestingly, Mount Ararat has a connection to the Genesis story as it is considered by some biblical scholars to be the resting place of Noah’s ark.

Tipping at Restaurants in Armenia

If you’re visiting Armenia, chances are you’ll be eating out at a restaurant in Armenia at least once. Having a meal can be a great way to sample Armenian cuisine, a refreshing midday break, or part of an enjoyable night out.

Before going to a restaurant in Armenia, you’ll want to know if a service charge is included in the price of your meal and whether you should tip or not to avoid tipping embarrassment.

Do You Need to Tip Waiters at Restaurants in Armenia?

If you’re eating at a restaurant in the capital of Yerevan, you should tip your waiter as it is expected. Until relatively recently, there was not a strong tipping culture in Armenia, but as the number of international tourists has grown, tipping has become expected in Yerevan.

If you’re eating at a restaurant outside the capital of Yerevan, tipping at small restaurants is less common. You can leave a tip at your own discretion.

At some restaurants, especially in Yerevan, you’ll find a ‘service charge’ of 8% – 10% on your bill. This does not go to the restaurant staff and is not a tip. Tipping is still expected at restaurants that charge it.

How Much Should You Tip At Restaurants in Armenia?

At restaurants in Yerevan, you should tip your waiter 10% of the total bill for good service. This is now a standard tip in Yerevan, although a range of 5% – 10% is still acceptable.

Outside of Yerevan, you can tip at your own discretion as tipping is less common than in the capital. If you leave a tip, 5% – 10% being acceptable.

Service Charges at Restaurants in Armenia

At some restaurants in Armenia, particularly in the capital of Yerevan, you might see a service charge on your bill. It’s typically 8% – 10% and you might think that it means a tip is not necessary. Actually, the service charge goes directly to the restaurant owners and not to your server. You still need to tip your waiter.

It’s a good idea to avoid restaurants that include a service charge in your bill. To avoid eating at such a restaurant, you can check a restaurant’s menu or ask the staff if there is a service charge. If you’re planning where to eat ahead of time, you can also use Tripadvisor to search for your restaurant and then search within the reviews for ‘service charge’.

Tipping at Hotels in Armenia

If you’re staying at a hotel in Armenia, you’ll want to know whether or not you should tip the hotel staff. Do you tip the luggage porter/bellhop who brings your bags to your room? Should you tip housekeeping for cleaning your room?

Do You Tip At Hotels in Armenia?

Tipping is not required at hotels in Armenia but is generally expected by the hotel’s luggage porters/bellhops in the capital city of Yerevan. If you don’t want to tip the luggage porter, you should carry your own bags to and from your room. If you would like to leave your hotel maid a tip for cleaning your room or the concierge for making a reservation for you, feel free to do so.

How Much Should You Tip At Hotels in Armenia?

If you’re staying in Yerevan, your luggage porter/bellhop will generally expect a tip for taking your luggage to and from your room. An appropriate tip is the equivalent of $1 in local (475 Armenian dram) or foreign currency. Yes, they’ll usually take dollars or euros and will give you change. Some more aggressive porters will even let you know it so the excuse of “I don’t have any Armenian dram yet” isn’t a great excuse.

If you’d like to leave your hotel maid a tip, you can tip the equivalent of $1 each day.

Many visitors to Armenia use a tour guide during their trip as part of an individual site tour or as a multiday Armenian tour package. If you’ve had an enjoyable tour and a knowledgeable tour guide, do you need to tip the tour guide at the end?

Do You Tip Tour Guides in Armenia?

No, you don’t have to tip your tour guide in Armenia, but tips are appreciated.

How Much Should You Tip Your Tour Guide in Armenia?

If you do decide to tip your tour guide, you can leave a tip equivalent to $2 – $3 per person per day.

Taking a taxi in Armenia can be a convenient way to get around town and to and from the airport. If you do it correctly, it’s also inexpensive. Before getting into the taxi that you’re hailing, you need to negotiate the taxi fare to your destination. Never get into a taxi where you haven’t already agreed on a price. In busy areas with more than a few taxis waiting for riders, it’s possible to negotiate fares down quite a bit.

When it comes time to pay at the end of the ride, do you need to leave your taxi driver a tip on top of the fare?

Do You Tip Taxi Drivers in Armenia?

No, you don’t have to tip taxi drivers in Armenia, but it is common to round up the fare.

How Much To Tip Taxi Drivers in Armenia?

If you do want to leave your taxi driver a tip, you can round up the taxi fare to the nearest hundred Drams. For example, if the agreed-upon taxi fare is 650 Dram, you could leave the taxi driver 700 Dram for a 50 Dram tip. That’s more than enough of a tip.

It’s common for taxi drivers to claim they don’t have change to try and pocket the difference. If you are taking a taxi and don’t want to leave a large tip, ensure that you have exact change or an amount that leaves only a small tip.

If you’re in Armenia and don’t want to negotiate with a taxi driver, using a hailing taxi app is a great way to get around town. If you’re from somewhere that has Uber, you will want to know whether there’s Uber in Armenia and, if so, how much you should tip the Uber driver.

Is There Uber in Armenia?

No, there isn’t Uber in Armenia. Don’t feel bad, though, because there are other app-based taxi services that are Uber equivalents.

Okay, There’s No Uber in Armenia. Who Can I Use Instead?

If you want to use an app-based taxi service, you can use GG Taxi, Yandex Taxi, or UTaxi. GG Taxi is preferred by locals because they have more taxis so it’s easier to find one nearby. Their vehicles also tend to be better than the competition and they almost always have change if you’re not paying by card.

Do I Need to Tip GG Taxi, Yandex Taxi, or UTaxi in Armenia?

No, you don’t have to tip any of these app-based taxi service drivers in Armenia.

Tipping Hairdressers or Barbers in Armenia

If you’re in Armenia and need a haircut, you’ll first want besides to find a hair salon with good reviews. Then you’ll want to know if you should tip your hairdresser for a good cut.

Do You Tip Hairdressers or Barbers in Armenia?

No, you don’t have to tip your hairdresser in Armenia, but tips are appreciated.

How Much Should You Tip Hairdressers or Barbers in Armenia

If you want to leave your hairdresser or barber a tip, you can tip 10% of the cost of the haircut.

Tipping at Spas and Massage Therapists in Armenia

Are you in Armenia and fancy a trip to a spa or a massage? There are a number of options in Yerevan and a few others in the countryside, such as the Armenian Health Spa in Jermuk. If you’re going to a spa or getting a massage, you’ll want to know if you should leave a tip as you would at home.

Do You Tip At Spas and Massage Therapists in Armenia?

No, you don’t have to tip at spas or massage therapists in Armenia, but tips are appreciated.

How Much Should You Tip at Spas and Massage Therapists in Armenia?