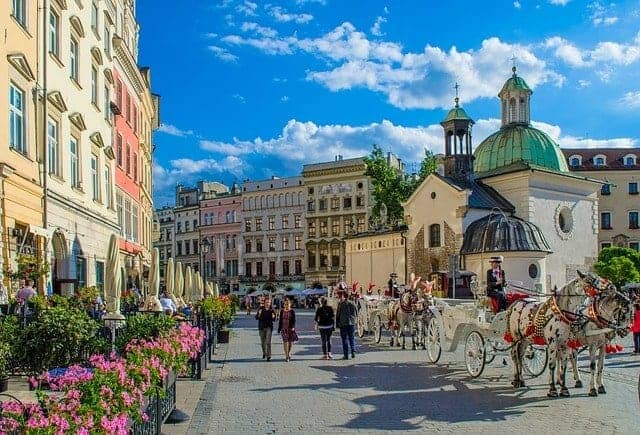 If you’re traveling to Poland, you’ll be planning flights, try to find the best hotel or other accommodation for your budget, picking a rental car, and perhaps looking at tours. You’ll also want to know what the most popular things to do in Poland are and figure out the local customs. One important local custom that every visitor should understand is tipping in Poland.

So, do you tip in Poland? You do tip in some situations, but not others. Read on to find out if you tip at restaurants, hotels, in a taxi, at a spa, on a tour, or at the hairdresser or barber.

Tipping at Restaurants In Poland

Restaurants in Poland are relatively inexpensive, so you might find yourself eating out frequently while visiting Poland. Restaurants are a great way to explore Polish cuisine or stick with a more familiar fare. Whether you’re eating at a Polish restaurant or not, you’ll want to understand restaurant tipping etiquette in Poland before you pay your bill.

Do You Tip At Restaurants In Poland?

It’s common and expected to tip at restaurants in Poland where a waiter brings you your food, especially in major cities in tourist areas. You don’t need to tip at counter service restaurants.

Outside of the ‘good’ restaurants in major cities and tourist areas, it’s more common to round up the bill rather than tip a set percentage.

Keep in mind that some restaurants will add a ‘service charge’ to your bill, especially for larger groups. If you see a service charge added to your bill, do not leave a tip. Service should already be built into the price of the item on the menu.

How Much Should I Tip At Restaurants In Poland?

You should tip your waiter 10% of the total bill for good service. If your restaurant has added a ‘service charge’ to your bill of 10%, which happens at a few restaurants especially with larger parties, feel free not to leave a tip on top of this.

If you’re eating at a regular restaurant outside of the major cities and tourist areas, you can round up your bill. For example, if your bill is 47 PLN, you could leave your waiter 50 PLN.

Tipping At Bars in Poland

If you’re drinking at a bar in Poland, you’ll get to sample some of the local beers and spend time with your friends. Perhaps you’ll even make new friends. Besides figuring out what beer to pick, you’ll want to know if you’re supposed to tip your bartender in Poland. Read on!

Do You Tip At Bars In Poland?

You don’t have to tip your bartender in Poland. If you do want to leave a tip, it’s okay to tip if you ordered a drink that took the bartender awhile to make or if the bartender was especially friendly.

How Much Should You Tip At Bars In Poland

While you don’t have to tip your bartender at bars in Poland, you can if you want to. If you’re leaving a tip, it’s best to tip an extra PLN. So if your beer was 5 PLN, leave the bartender 6 PLN.

Tipping At Hotels In Poland

Do You Tip At Hotels In Poland?

At hotels in Poland, you are not obligated to tip the hotel staff with the exception of the bellhop/luggage porter.

While you don’t have to tip the other hotel staff, you can leave your housekeeper and the concierge tips at your discretion for exceptional service.

How Much Should You Tip At Hotels In Poland?

If your hotel has a bellhop/luggage porter, you could tip him 5 PLN for bringing all of your luggage to your room. This is enough and keep in mind it’s 5 PLN total, not per bag.

Will you be taking a tour at some point during your visit to Poland? If you are, you’ll want to know if you should tip your tour guide at the end of the tour.

Do You Tip Tour Guides In Poland?

Although you’re not obligated to tip your tour guide in Poland, it is relatively common to leave them a tip. When deciding whether to leave a tip or not, remember that you should only leave a tip for an exceptional tour guide. Don’t leave a tip for what was a mediocre tour.

The same advice above goes for tour drivers. You’re not required to tip them, but it is common.

How Much Should You Tip Your Tour Guides In Poland?

If you want to leave your tour guide a tip, consider tipping 5% – 10% of the cost of your tour. 5% would be for a good tour while 10% would be for an exceptional one. Although this might seem like not so much money, given the relative affordability of Poland, it is a good tip for the tour guide. Remember that Poland’s tipping culture is not the same as where you come from.

Do You Tip Taxi Drivers In Poland

No, you don’t need to tip your taxi driver in Poland. It is, however, common to round up the taxi fare at the end of your ride for convenience. Other tipping guides suggest that you need to tip a large amount to taxi drivers but this is not the case.

How Much Should You Tip Your Taxi Driver In Poland

Although you don’t have to leave your taxi driver a tip, you can give your taxi driver a tip by rounding up the taxi fare at the end of the ride. If, for example, your taxi fare was 28.50 PLN, you could round up the bill to 30 PLN. Your driver will be happy with that tip and you should only tip if the driver was professional, drove safely, and helped you with any bags you might have had.

If you’re coming to Poland for the first time and need a taxi, but want to avoid falling prey to an unscrupulous taxi driver, you might be interested in using an e-hailing app while visiting Poland.

First Off, Is There Even Uber In Poland?

Yes, there’s Uber in Poland! You can use your Uber app to order an Uber the second you get into Poland, no need to install a new app.

Do You Tip Uber In Poland?

How Much Should You Tip Uber In Poland

What Are The Alternatives To Uber In Poland

If you don’t want to use Uber or if the area you’re staying in doesn’t yet have Uber, there are several other e-hailing apps available in Poland. There is Taxify, FREENOW (which isn’t free), Cab4U, iTaxi, and Taxi Polska.

Do You Need to Tip Taxify, FREENOW, Cab4U, iTaxi, or Taxi Polska in Poland?

No, you don’t need to tip your Taxify, FREENOW, Cab4U, iTaxi, or Taxi Polska taxi driver in Poland. You can leave a tip in cash for exceptional service if you feel like it, but that’s entirely up to your own discretion.

Tipping Hairdressers and Barbers in Poland

If you plan on getting your hair cut or styled while you are in Poland, you’ll want to know whether you are supposed to tip your hairdresser or barber. If you do need to leave a tip, how much should you give?

Do You Tip Your Hairdresser In Poland?

You don’t need to tip your hairdresser in Poland. It is somewhat common to round up the bill at the end but that’s entirely at your discretion.

How Much Should You Tip Your Hairdresser In Poland?

Although you don’t need to leave your hairdresser a tip, you can round up the bill at the end if you received a great hair cut and styling. For example, if the hairdresser charges you 33.50 PLN, you could leave 35 PLN.

Do You Tip Your Barber In Poland?

No, you don’t need to tip your barber in Poland. It is, however, fairly common to round up the bill at the end which effectively gives the barber a small tip.

How Much Should You Tip Your Barber In Poland?

Although you don’t need to tip your Barber in Poland, it’s somewhat common to round up the bill. For example, if the cost of your hair cut was 19 PLN, you could leave your barber 20 PLN.

Tipping at Spas In Poland

Poland is well known for its spas. Besides their medical benefits, they’re a great place to visit for a day (or longer) to relax. If you’ll be going to a spa during your visit to Poland, you’ll want to know whether you are supposed to tip the spa staff or not. If you are supposed to tip, how much should you leave?

Do You Tip At Spas In Poland?

While you don’t have to tip at Spas in Poland, it is a fairly common practice among foreign tourists. If you do want to leave a tip to a particular staff member for a treatment, make sure you only do so if you received exceptional service.

If you did receive a great service, first ask the spa staff person if they can accept your tip. If they can’t, there’s often a tip envelope at the front desk that you can use.

How Much Should You Tip At Spas In Poland

Remember that you don’t need to tip at spas in Poland. That said, it’s a common practice among foreign tourists so some of your staff providers will have experience receiving tips and might even expect them. If you’d like to leave your spa staff person a tip for exceptional service, you can do so at your discretion. As a guide, tip 5% – 10% of the cost of the treatment, but no more.