Tipping In Guam: Everything You Need To Know (Quick Guide) 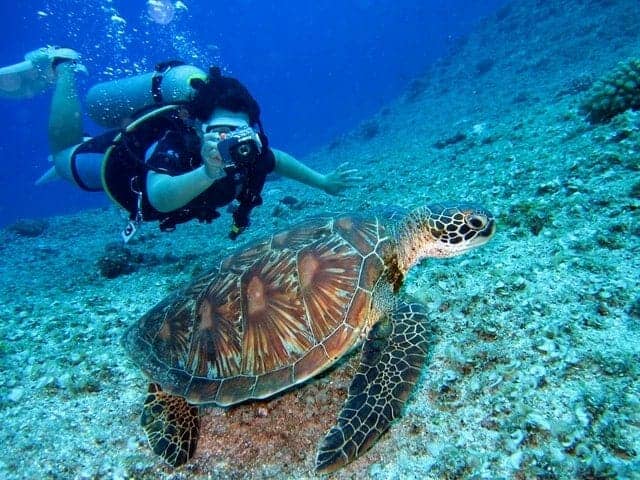 If you are traveling to Guam, you’ll be planning your flights, picking your accommodations, reserving a car rental, and looking at tours and watersports. It is a beach destination after all! There are some very interesting scuba diving spots on Guam so if you like scuba diving or want to learn, check out the local dive shops. You will also want to know what the most popular tourist attractions in Guam are and figure out the local customs. One important local custom that every visitor should understand is tipping in Guam.

So, do you tip in Guam? It depends on the situation. In this Guam tipping guide, we will cover whether you tip at restaurants, hotels, in a taxi, at a spa, on a tour, or at the hairdresser or barber.

You can’t go wrong with the local cuisine but there are a wide variety of restaurants in Guam spanning many other different cuisines. Guam is a non-incorporated territory of the United States plus it has a large American military presence, so it’s no surprise that you have lots of American food options. If you like Asian food, you’re especially in luck because Guam is a very popular destination for Asian tourists and 20% of the island’s inhabitants have Filipino heritage.

Do You Tip At Restaurants In Guam?

Yes, you’re expected to tip for good service at restaurants where a waiter brings you your food in Guam.

Before you add a tip on top of your bill, though, there is an important catch that you need to be on the lookout for; automatically added service charges!

International tourism is an important part of Guam’s economy, which includes restaurants. The whole island is a popular beach destination for Americans and many foreign tourists, some of whom aren’t aware of the tipping etiquette in Guam. That’s why many restaurants, particularly in the Tumon area, add a service charge to the bill which is an automatic tip.

The service charge can vary but it’s generally 10% – 15% and it’s used to ensure their employees receive fair wages.

So before you give servers a tip, make sure that there isn’t already a service charge in your bill. Otherwise, you might double tip!

How Much Should I Tip At Restaurants In Guam?

Before you leave a tip for the wait staff, make sure that the restaurant hasn’t already added a service charge to your bill. An automatic service charge of 10% – 15% is becoming more common in Guam so if your restaurant charges it, don’t leave a second tip on top of it!

If you’re getting take out you don’t need to leave a tip but you can leave a little something if you want to. There’s often a tip jar for this.

If you’re headed to a bar, you’ll want to know what the crowd is like and what the bar’s drink specials are. Don’t forget to think about whether you need to tip the bartender in Guam or not. So, do you need to tip at bars in Guam?

Do You Tip At Bars In Guam?

Yes, you should tip your bartender at bars in Guam. That said, check whether a service charge is already included in your bill or not! If there is a service charge, you don’t need to leave a tip.

How Much Should You Tip At Bars in Guam?

Unless you’re staying at a vacation rental, at an Airbnb, on the base, or with friends and family, you’ll probably be staying in a hotel while you’re in Guam. There are tons of options for hotels on Guam across a range of budgets.

Do You Tip At Hotels In Guam

Tipping is optional at Guam hotels with the exception of the bellhop/luggage porters. Bellhops will expect a small tip from guests for taking care of their bags.

How Much Should You Tip At Hotels In Guam

You can tip your bellhop $1 to $2 per bag brought to your room.

If you want to leave your housekeeper a tip, you can leave $2 to $3 each morning before you leave your hotel room. Be sure to use the hotel’s housekeeping tip envelope or leave it on the bed with a note. Otherwise, your hotel maid might not be able to take it due to hotel rules.

While the concierge doesn’t need to be tipped, feel free to give a gratuity of $5 for booking a hard to deal with reservation or tour.

Will you be taking a tour at some point while you’re in Guam? Or perhaps you’re in Guam on a tour package. If either’s true, you’ll want to know if you should tip your tour guide at the end of the tour.

Do You Tip Tour Guides In Guam?

Although you don’t have to tip your tour guide in Guam, it is very common to do so. If it’s a group tour, there might be a group tip collection near the end of the tip which makes tipping even more common due to social pressure.

How Much Should You Tip Your Tour Guides In Guam?

If you want to leave your tour guide a tip for a half-day or single-day tour, consider tipping 5% – 10% of the cost of your tour. 5% would be for a good tour while 10% would be for an exceptional one.

Do You Tip Taxi Drivers In Guam?

No, you don’t need to tip your taxi driver in Guam. Although other tipping guides suggest leaving a tip of 10% – 15%, that’s not necessary. Of course, if you do want to leave a tip for an especially courteous taxi driver, feel free to do so.

How Much Should You Tip Your Taxi Driver In Guam?

Although you don’t have to tip your taxi driver, tips are appreciated. If you want to leave a tip, consider rounding up the taxi fare at the end of the ride.

For example, if the taxi cost was $18.50, you could leave the taxi driver $20. Your driver will be happy with that gratuity and you should only tip if the driver was professional, drove safely, and helped you with any bags you might have had.

If you need transportation around town but aren’t renting a car and would prefer not to use taxis, you’ll want to use an e-hailing service, such as Uber. When you take an Uber or an Uber equivalent, do you need to tip the driver? How much of a tip should you leave?

Is There Uber In Guam?

Unfortunately, Uber is not in Guam so there are no Uber drivers available. Thankfully, there is an alternative option available.

What Is The Alternative To Uber In Guam?

Although Uber isn’t in Guam, there’s a great alternative called Stroll Guam. You can go to their website by clicking here or you can download their app from the Apple Appstore or the Android Play Store.

Do You Need to Tip Your Stroll Guam Driver?

No, you don’t need to tip your Stroll Guam driver. If you do want to leave a tip for exceptional service, feel free to do so.

How Much Should You Tip Your Stroll Guam Driver?

Although you don’t have to tip your Stroll Guam driver, tips are appreciated. An easy way to leave a tip is to round up the fare. For example, if your Stroll Guam ride fare is $18.50, you could leave the driver $20 in total.

If you’re getting your hair cut or styled in Guam, you’ll want to know if you need to tip your hairdresser or barber. If so, how much should you tip?

Do You Tip Your Hairdresser In Guam?

Yes, you should tip your hairdresser in Guam. Whether you tip or not should be based on the haircut you received, though. Only leave a tip for good service so if you receive a mediocre cut or styling, don’t leave a tip.

How Much Should You Tip Your Hairdresser In Guam?

Do You Tip Your Barber In Guam?

Yes, you should leave your barber a tip in Guam if you received a good haircut or beard trim.

How Much Should You Tip Your Barber In Guam?

You should leave your barber a tip of 10% – 15% of the cost of your haircut. Only leave a tip for a good haircut, though. Feel free to leave nothing for a mediocre haircut.

A trip to a day spa in Guam is a relaxing treat that can take a weight off of your shoulders, help you destress, or relax after a hard day’s work. If you’ll be going to a spa in Guam, you’ll want to know if you should leave the spa staff a tip or not. If you are supposed to tip, how much should you leave?

Do You Tip At Spas In Guam?

If you received good service at your spa treatment or massage, you should tip.

How Much Should You Tip At Spas In Guam

You should tip 10% – 15% of the cost of your spa treatment (or treatments!). Only tip if you were a satisfied customer, though, since tips should be connected to the service you received.

If you’re going scuba diving, taking a boat ride, or going fishing while in Guam you’ll want to know if you should tip your boat’s staff. If you do need to leave a tip, how much should you leave?

Do You Tip Boat Staff In Guam?

Yes, you should tip the boat staff in Guam if you’re going scuba diving, taking a boat ride, or going fishing.

How Much Should You Tip Boat Staff In Guam?

When you take a boat ride, it is customary to tip $5 – 10 among the crew. If you’re going scuba diving or fishing, different rules apply.

For fishing, you can tip 10% to 15% of the cost of the fishing charter cost. Only tip if the crew was good, though.

People often have specific questions about Guam. Here are some of the most common questions people ask.

Are there sharks in Guam?

Yes, there are sharks in Guam although attacks on humans are rare. In the last ten years, there was one fatal shark attack involving a tourist who was swimming near a reef while more recently there was a minor bite in 2019 of a paddler who accidentally fell into the water.

While attacks are rare given the large number of visitors that enjoy the water without issues, you should still exercise caution. There is a small chance of an attack if you swim too far out or venture close to a reef.

What is Guam’s minimum wage?

This is an increase of 50 cents from the prior level that was set in March 2020.